the first of a series of retrospectives in honour of Modern Times’ 30th anniversary season. 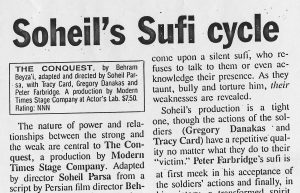 This was the title of Modern Times’ first-ever review on June 22, 1989 —by none other than Jon Kaplan, a fresh young theatre critic at NOW Magazine. Soheil and Peter had just mounted their first professional production, “The Conquest”, by Bahram Beyza’ie, at the Actor’s Lab Theatre on George Street (just a stone’s throw from Buddies-in-Bad-Times’ first theatre space). It would go on to play at the inaugural Toronto Fringe Festival later that summer.

It is an honour to have had our first review from Jon, who passed away in 2018, and who gave so much to Toronto theatre and to companies like Modern Times. Jon was one of the company’s ardent supporters at the beginning, seeing the work for its own sake, and not simply for the exoticism of its Middle Eastern influences.

These were times when intercultural, hybrid theatre of the kind Modern Times was proposing was far less seen, and thanks to the belief of community members like Jon, the company was able to introduce many Persian works in English translation for Canadian audiences. Soheil and Peter went on to translate and adapt six more over the years, winning Dora Awards for translation/adaptions such as Beyai’e’s “The Death of the King” and Abbas Na’albanian’s “Stories from the Rains of Love and Death”. Beyza’ie’s “Aurash”, translated with Brian Quirt, has played in four countries and has been translated into three different languages (Spanish, Farsi and Serbo-Croat), with a French-language version on the way. An anthology of these plays is available at Playwrights Canada Press. 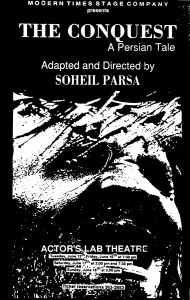 As for “The Conquest”, translated and adapted by Soheil from Beyza’ie’s screenplay, “The Wanderer”, this first show was mounted with a $300 production budget, 1 metric ton of sand (whose dust put us on a permanent blacklist at the Fringe’s theatre space), and a lot of belief in the value of the plays coming from lesser-known authors. A story of persistence in the face of tyranny, “The Conquest” owes its philosophical centre to the Sufist values of non-violence and altruism that have since permeated the company’s work.