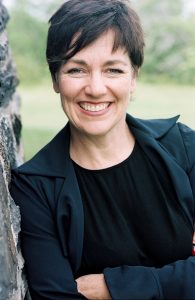 “The Balcony” was huge for me. It was my first show out of theatre school and was truly a life-changing experience. The wild theatrical sensibility and political fire that Soheil brought to it still informs me. I didn’t know theatre could be like that, and Soheil was like no one I’d ever met.  He wanted to change the world with his theatre, he was a revolutionary. He still is. Soheil cracked open my imagination about what it meant to do a committed performance in a politically relevant show.  He would say “I want crazy actors!”  He held the bar so high. I have vivid memories of my heart pounding out of my chest on the way to rehearsal. I wanted so badly to rise to his dream for the show, and the world.  We’d research and rehearse in a tiny dark upstairs room in the theatre and Soheil would basically give a masterclass on his vision of theatre and how it could shake up the world. It felt like we actually could do that.

The cast was incredible, and I had the biggest crush on the actor playing the General – the brilliant Martha Cronyn. I’ve wondered over the years where Martha is, if she still acts on stage (gosh I hope so). I adored so many involved in the show -Anita La Selva, Peter Farbridge, Leanna Brodie, Kim Collier, Andrew Scorer, etc etc.  It felt like we all equally wanted to create work that mattered despite the many practical challenges. Some of those challenges flash to mind now and then…like the massive rope net set that hung from ceiling to floor that we could climb and during one show Sandy McMaster was making an entrance and ripped his foot open on a hook that held down the rope net. Blood spurted out in a stream. 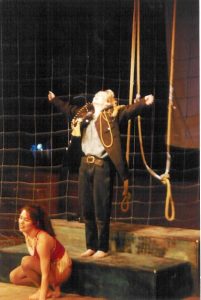 And the actor playing Madame Irma had just had a baby in real life and she told us that her husband was shocked she was rehearsing a show so soon after giving birth and that their life was in chaos at home, and one day his frustration culminated with him yelling “there is no bread in the house!”  We still say this in our house when things are out of control with work and life. And being the first show in the “new” Theatre Centre on Queen West, that’s 2 Theatre Centres ago, there were things to be worked out like when the toilet flushed upstairs it sloshed down the pipe in the theatre for all to hear several times during performances. Exhilarating challenges!

When we opened my parents drove 6 hours from my hometown in Blind River Ontario to come and see it. After the show my dad said “Well, it wasn’t The Sound of Music.”

On closing night we had a fantastic party that lasted most of the night.  After the party, Kim Collier and I walked across Toronto in our bare feet as the sun rose, both feeling like we could do anything.

…
Ann-Marie Kerr is an award-winning theatre director, actor and teacher. Her work has been presented nationally and internationally. She is a graduate of École internationale de théâtre Jacques Lecoq in Paris and York University. Ann-Marie teaches and directs at the National Theatre School among other theatre schools and is the former Artistic Associate of Magnetic North Theatre Festival.
Her current directing projects:
One Discordant Violin, co-directed with her husband Anthony Black, will tour to NYC in November 2019.
Secret Life of a Mother, developed in residence at the Theatre Centre in 2018, will tour to Crow’s Theatre in Toronto in February 2020.
Daughter will tour to the Battersea Arts Centre in London in March 2020.