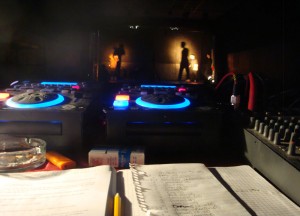 Modern Times is a company of exceptional spirit, and our productions of Aurash during the 2009-10 season typified that spirit – of everyone jumping in and doing what they could to make a production happen.

Working with Modern Times can be challenging. It requires vulnerability and a willingness to work in a way that you never have before…

So when I found myself stage managing our production of Aurash in Mostar that season (despite a complete absence of professional stage management credits on my resume), I shouldn’t have been surprised. Soheil figured I could do it, and so I would try.

There were some variables:

– There was no booth at OKC Abrašević, so Denan and I were sitting at the back of the house and wouldn’t have been able to talk anyway.

– There was no sound operator, so I was running sound too.

Aurash is a fairly tech-heavy show. The text runs just 20 pages, but there are about 60 sound and lighting cues to be called during its one hour running time.

After four weeks of rehearsal, however, I came to know the play in the local language and began to call cues based on the rhythm of the text and visual cues. Denan and I developed a fairly sophisticated series of hand signals to denote standbys and gos for each of his cues. I executed these whenever my hands weren’t busy bringing sound cues up and down on an old school 70s sound board. It went well, all told.

Stage managing Aurash was a kind of magical experience for me and I came to love the piece in that context – through a release of its narrative meaning in favour of its beautiful spirit. Which seemed only appropriate for this piece: an ancient Persian myth, re-interpreted by Beyza’ie into Farsi, translated and adpated into English by Soheil and Brian Quirt, and finally translated into Serbo-Croatian by Dragana Varagić and Mihaila Petričić.

The voyage Aurash has taken over the years and my own part in that journey has made me admire it all the more.