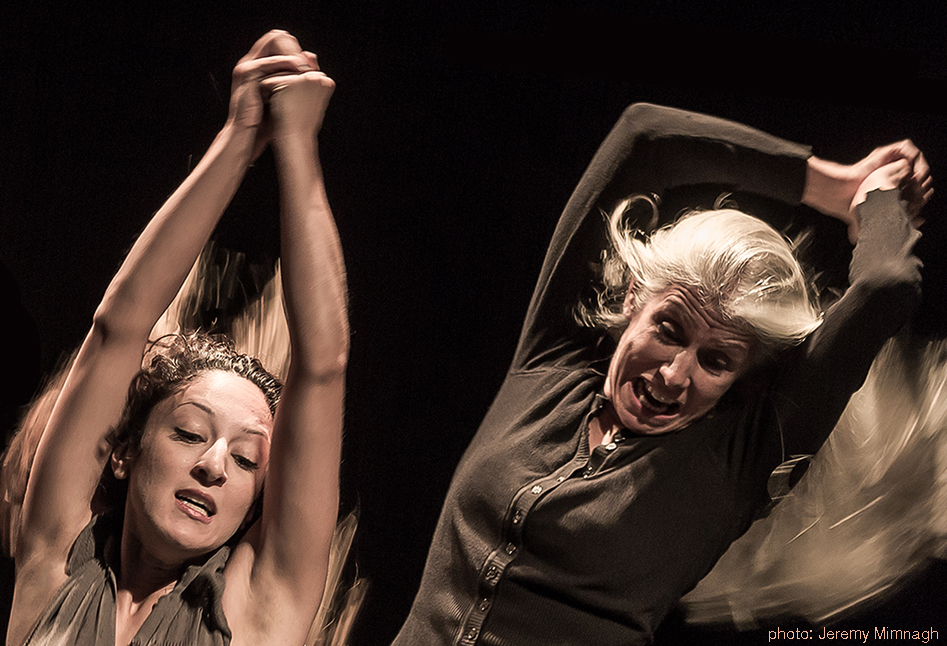 “The history of forgiveness found its end in Auschwitz”, wrote the French philosopher Vladimir Jankélévitch. This is a very strong, yet by no means simplistic statement, expressed and explained within a philosophical structure that seems to be the right place to reflect on subjects such as “forgiveness”. So given that philosophy or theology would be the place to consider the meaning of “forgiveness”, a theatrical approach seemed somewhat startling and, thinking of Jankélévitch’s statement, I was curious about what would happen on stage.

Here is what I saw:  A minimalist stage held together by a couple of chairs, some microphones hanging loosely from the ceiling, and by the black outfits of the actors and dancers: an almost black and white image that gives great relief from the shrilly coloured world I have left a few minutes ago. The lighting guides the eye through the piece like a kind nurse. And by creating a balance of light and dark – always the pinch more darkness that is needed to balance the light – it gives me the security of following the logic of a space I haven’t seen before.  I feel calm, almost happy. The play’s subtitle is: “A Theatrical Poem”, and yes: there is the rhythmical force that drives the piece, there are these shifts of weight – making the heavy light and the light heavy – which seem intrinsic to poetry. Everything appears to be effortlessly crafted by somebody who knows his art well. 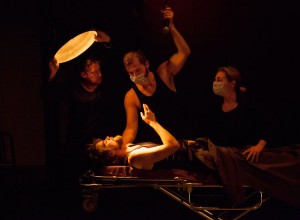 Yes: what I see is beautiful. And this is exactly why, after a while, I start getting confused: the sparse stage and costume design, the movements of the dancers attractively accentuated by light and shadow and the text that comes across as a sound poem all seduce the eye and the ear. And so it is only slowly that I note that nothing comes together, everything stays fragmented and, almost until the very end, the fragments are not given any hierarchy: in that way, the recorded disappointment of a girl whose boyfriend is not able to forgive a small mistake and the Nazi who, haunted by the atrocity of his deeds, seeks forgiveness seem to have the same theatrical weight. And every attempt at communication between the performers or the stories seems to get stuck in this fragmentation; even though plenty of words are spoken, an opaque silence saturates the stage.

After a while I wonder whether I should get upset and the moment I finally feel that I should form an opinion about this performance, I see all the performers line up to face the audience, still discussing, still trying to communicate. And then one of the dancers, Andrea Nann, slowly starts turning upside down, ending up in a perfect headstand. From this position she shouts exasperatedly: “Why are we here?”

This is a wonderful moment, a clownish Beckett-like moment, hysterically funny and grave at the same time. Yes, why are we here? Why do we share an evening together, breathing the same air for two hours, sitting on mildly uncomfortable seats under the roof of a single word, “Forgiveness”? The question is comical, but it is likewise an important question and a courageous one, too, because, in its final consequence, it is mooting the role and importance of theatre itself. I am sure there are a lot of imaginable answers to this question. And while I am still looking for a conclusion, my favoured thought so far is this: the Modern Times Stage Company’s production is a theatre work that abstains from judgement and leaves us free to observe. Despite the minimalist aesthetic of “Forgiveness”, this theatre allows us to enter a vast cabinet of curiosities, a collection of feelings, story fragments, thoughts, movements, words, cries, laughter, an abundance of material whose correlation is not yet clear. Neither Soheil Parsa nor any one of the performers seems to add his or her idea of forgiveness to our own. Rather he is handing us the aforesaid collection, a collection created as much to reveal as to conceal. And since we incorporate our own secret material into the collection, this theatre becomes an ever-moving space of possibilities, an invitation for experimental arrangements of ideas, interpretations and concepts. Not in order to simply let us fill in the blanks with our very own ideas of forgiveness. Rather, to grant us the experience of the shaky, eroded premises of such ideas and judgements. “Forgiveness” remains, after all, the empty spot in the center of this performance: What is forgiveness? Is forgiveness possible? Soheil Parsa shows that we cannot answer these questions, and yet they have to be asked time and time again and we have to attempt new answers time and time again. Granted, this is a Sisyphean task, but, as we have seen, it can be done beautifully.

Angelika studied law and theatre in Frankfurt, Milan and Berlin where she worked at the former Hebbel Theater for several years. More recently, she collaborated with Miriam Aziz and Artist(s) at Large in New York, Heidelberg and Milan as freelance dramaturge and translator.