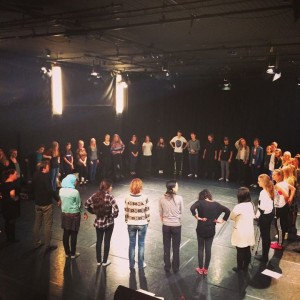 The Students of the Favrskov Gymnasium

As part of the pre-production activities leading up to the show this week at Bora Bora Dance and Visual Theatre, in Aarhus, Denmark, the artists of ‘Forgiveness’ were involved in several peripheral activities to the production.

Barbara Simonsen (Laboratoriet), Andrea Nann (Dreamwalker Dance Productions), and Peter Farbridge (Modern Times) chatted about the show and its theme with the staff and students at the Vestjyllands Højskole near Ringkøbing. Andrea led the group in a series of movement explorations. The trio later gave theatre workshops to high school students from Favrskov Gymnasium at Bora Bora. These same students will attend the production later this week.

Rehearsals have begun and the theatre is being prepared. We’re eager to play this piece to Danish audiences!