Modern Times’ mandate is to give a voice to artists; to this end, we would like to share a series of essay pieces written by former artists of Modern Times, specifically, but not limited to, those from Black, Indigenous or racialized communities, to give them a voice and highlight their creative work. Our ninth article in this series features Keshia Palm–actor, director and dramaturg–who underlines the importance of working together when times are tough.

That phrase is stitched on a black ball cap I bought in 2018. Due to a mild traumatic brain injury, fluorescent lighting gave me searing migraines for months, and made me a wear-a-cap-indoors kinda gal. My injury also forced me to drop out of a Modern Times production just a few weeks before rehearsals started.

Soheil trusted me with a role in another MTSC production the following year. Even after a full recovery, The Cherry Orchard was a challenge. I felt lost, frustrated, and even angry at times, because art is hard. When art-making one starts with a lot of questions, and not a lot of answers. The work can get exponentially more challenging as personal processes meet in collaboration. Everyone must play the same game, with the same rules, on the same team, together. Often artists are taking creative risks that impact others, and that must be responded to in turn. The process can be mentally, physically and emotionally exhausting.

Watching the NBA Playoffs this year reminded me of that feeling – of being in process. I am not at all trying to compare myself with a professional basketball player (LOL); rather, I invite a comparison between the athleticism, focus, and collaboration required of an artistic process and the NBA.

This past summer, players were brought into a playoff season during a global pandemic, while a race revolution unfolded around them. Players were asked to perform the most gruelling part of the season—perhaps of their entire careers—during a time of unprecedented racial, economic, and social unrest. I’m not sure if you know this, but most of the players in the NBA are Black.

How could they summon the athleticism, focus, and collaboration required to compete with excellence in that moment?

Art – like basketball – is hard enough without having to navigate white supremacy. I’m tired of watching athletes compete in an isolated bubble while the world around them takes to the streets. I’m tired of IBPOC artists being asked to do great work while contending with the added obstacle course of systemic oppression. I’m tired of seeing IBPOC artists shine onstage (whether it be their performance, script, design, or direction) and hearing afterwards that it came at the expense of their mental and emotional wellbeing. Worse, I’m tired of hearing of instances where artists could not shine because the mental and emotional toll was too high.

Sometimes, it’s better not to play at all.

An episode of the NPR podcast Code Switch (“Ask Code Switch: What About Your Friends?” – January 2020) highlighted research showing that in spaces where there’s racial inequity, children of color coming together in same-race friendships is a protective response. It is not about outgroup prejudice (although it’s often seen that way by white educators). It’s about preservation.

In white children, however, exclusive ingroup, same-race friendships do correlate with outgroup prejudice. As Gene Demby explains in the podcast, “Black kids are huddling together at the school cafeteria table…for solidarity because they’re ostracized otherwise in mostly white schools. […] But those whites-only tables — which are most of the rest of the tables — that is white kids policing their space for whiteness.”

Theatre is no different. Our artistic and creative spaces are still racially segregated.

Working in Primarily White Institutions (PWIs) comes with a lot of benefits: larger budgets, longer runs, bigger audiences, greater media coverage. Plus, there are more of them. There are simply more white-run, white-led, white-fed theatre companies than not. Theatres where the same handful of white, cis-het actors are cast in several shows within each season.

I’ve worked on projects and walked away thinking, if that’s what it feels like to work in white theatre, I’ll pass. I knew that I would not be able to do my best work in those spaces. Faced with the choice, I chose to sit with the brown folks in the cafeteria. At the table with less money, less opportunity, less recognition, less time. The table with less.

In a recent Hot House Playwriting Unit session with Cahoots Theatre, one of my fellow writers said, “I am in a lot of Zoom meetings like this, and I have to say, this one is my favourite.”

In the chat box, I replied: “Is it the most melanated?”

A screen of brown folks laughed, because it was true.

There are companies who unapologetically carve out safe spaces for IBPOC artists to thrive. To them I say, from the bottom of my heart: thank you. I would not still be here without you.

I recognize that many of the spaces that have held me have not made room for my D/deaf, disabled, queer, trans, and gender non-conforming/non-binary peers to thrive. There are folks whose access is policed far more heavily than mine; it is a privilege that I even had a choice of which table I wanted to sit at.

As our industry shrinks due to COVID-19, I fear marginalized artists (literally, artists on the edge) will be pushed out. I worry that I may be one of them – that when the time comes to clear out the cafeteria, our table will be the first to go.

I want to sit at the table with you. When the art gets hard, I want you and I to both feel safe and excited to work through it together. A lot has to change for that to happen, but it starts with us looking at the cafeteria and seeing the same thing. We need to see the outgroup prejudice, the hoarding of resources, the protection and preservation of culture, and respond.

In that same Hot House meeting, Wallis Caldoza sent us off with a wish: “Feel good writing.” Art is hard, but it should feel good. My wish for you is that it does. Because it can. And when it does, it does. It really does. 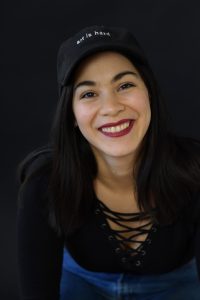 BIOGRAPHY: Keshia Palm is a Toronto-based Filipinx-Canadian settler from Treaty 6 Territory who seeks to expose, challenge and dismantle systems of oppression by creating thoughtful and inclusive art/spaces. She has developed and performed new works with companies across Canada as a director and performer, and is the dramaturge for a number of works in development by BIPOC, queer, women and trans artists. Her most recent project Make Me An Alleycat is a step-by-step guide to make your own adventure (even during COVID times). Make Me An Alleycat connects loved ones from the physically distant comfort of a bicycle (or bed – it’s flexible). Keshia is a playwright in the Hot House Lab at Cahoots Theatre this season and the Online Content Producer at Generator. www.keshiapalm.com