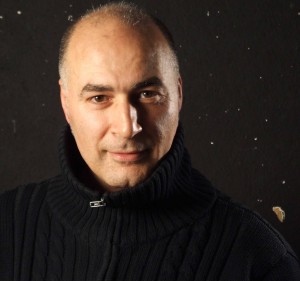 “The theatre productions of         Mr. Parsa have been valuable for me in several ways.”

The minimalistic nature of Soheil’s productions helps the audience to focus on the essential. There is no room for arbitrary interpretations beyond the control of the director. Soheil bravely demands all the attention of the audience, and he surely deserves it all because he has a lot to express, and he does so with power and determination. I watch each play more than once, and at the end of each show I feel exhausted: the processing of the barrage of ideas, and the new feelings I want to comprehend is very demanding.

Each production is motivated by a genuine human necessity. It examines a deep human condition and brings the ‘artistic truth’ closer to a philosophical possibility. At the same time, new theatre techniques are explored and blended with human conditions. This blend brings about new discoveries about hidden yet fundamental traits of my own personality.

Each production has been an extensive project, a deep journey that connects me to the most powerful artwork that I have seen;

* In ‘Aurash’, the effective use of light and darkness, much as musical notes and silences, as well as the strong acting, made me see fear and rage in Goya’s paintings. In the same production, I felt at times that I was in the midst of Picasso’s ‘Guernica’.

* In ‘Hallaj’, the ultimate mystic notion of ‘intimacy’, a simple yet complex notion, was successfully captured and presented in a visual manner, and it was incorporated in ‘Hallaj’ as a man!

* In ‘The Lesson’, Soheil managed to examine psychotic traits of individuals and coherently merge them with that of the mobs: this became a natural, yet deep and powerful, reflective journey to re-discover some historic patterns.

The selection of Modern Times’ work is extremely thought provoking and examines some deeper human paradoxes and dilemmas. At the same time, each work is an explorative journey into theatrical elements: the simplicity of staging helps to reveal the techniques, and this has been educationally invaluable for me.

It must also be said that Soheil’s freelance work extends beyond the walls of Modern Times. He generously educates the developing artist. It is also our ‘modern times’ that Soheil invests in the future generation by involving younger students of the arts.

The stage work of Mr. Parsa and Modern times Stage Company is the kind of work that I believe to be as genuine as any art work in my city.

Soheil Homayouni is a long time Silver Sponsor of Modern Times Stage Company. He has been in our audience for many years, and has also contributed his talents to serve as a photographer for several of our productions in recent seasons.