It began with Modern Times’ first production of Bahram Beyza’ie’s ‘The Conquest’ (‘The Wanderer’) in 1989.

Soheil needed something set-wise for the main character (The Sufi) to sit on. He found an old tree stump at the side of the road and decided it was perfect. For the entire play, the Sufi sits on the stump in silence while he is berated and abused by two enemy soldiers, who do not succeed in breaking his will. As I played the Sufi, I spent a great deal of time on this stump. I still remember the feeling in my butt of the different cuts on the surface of the wood. The tree (which in the play had been cut down by the enemy) still served to root the Sufi’s beliefs and resolve for non-violence. In my research for the role at the time, I read a great deal of Sufist poetry; I remember how they spoke of wind, sun, streams and branches– nature as an allegory of the essence of being, of timelessness. 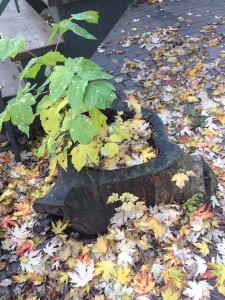 What do we do with props after a show closes? Most of them unfortunately get junked; a few end up in prop shops; sometimes, Modern Times’ props, costumes and sets find themselves  recycled by company members for their personal use. Such is the case of this tree stump: Soheil’s wife, our long-term Diamond supporter, Azita Parsa, took the gnarley stub, burned out a hole the middle and fashioned it into a kind of decorative coffee table with coloured rocks in the centre. I remember it at their home when Soheil and I were working on the adaptation of ‘Macbeth’ in 1995.

At one point, Azita decided she wanted to get rid of it (it’s a huge dust trap, after all), so in a spasm of nostalgia I had it transported to Montreal, where it remained as a coffee table for several years, until the looming threat of my daughter falling and smashing her head on the glass, as well as my numerous stubbed toes on its roots forced me to banish it as a planter to the front yard of my Montreal apartment, where it still sits, pushing up flowers and saplings, and reminiscing about its old days in the theatre.

Peter Farbridge is co-founder of Modern Times and has served as the company’s Co-Artistic Director for 25 years.