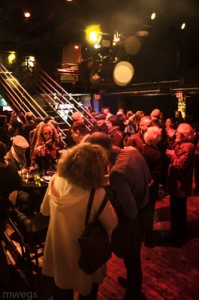 The evening could not have come off better on October 27th at Talulah’s Lounge of Buddies and Bad Times. One hundred of our collaborators, supporters and friends were on hand…

to celebrate Modern Times’ 25th year of producing theatre in Toronto, and to enjoy some great food, courtesy of Mezzetta Restaurant.

Canadian theatre legend Paul Thompson framed the evening with a speech about the consistent quality of Soheil Parsa’s work over 30 productions, and the significance of the longevity of Soheil Parsa and Peter Farbridge’s professional collaboration. Thompson noted that Modern Times has paved the way for a new generation of intercultural theatre artists. Soheil Parsa and Peter Farbridge took to the stage to talk about the company’s debt to its collaborators, and recounted some of their adventures in Bosnia and Iran that marked their thirty-year friendship. Soheil and Peter also acknowledged some of Modern Times’ closest collaborators over the years: designers Thomas Ryder Payne, Angela Thomas, producer Sue Balint and Board Chair Christine Moynihan.

In a much appreciated moment of performance, Thomas Ryder Payne, Modern Times long-time sound designer, presented a 5-minute mash-up of some of his sound creations for the company over 12 years.

Our thanks go out to the team of Buddies and Bad Times for their heartfelt support of the company. Modern Times is looking forward to its co-production of ‘Blood Wedding’ with Aluna Theatre at Buddies in March.