Work has already begun on our major production this season of Blood Wedding. A co-production with Aluna Theatre, this classic work by Federico Garcia Lorca will be presented at Buddies in Bad Times Theatre in March 2015… 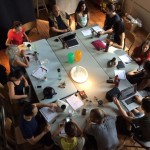 With casting complete over the Summer, we were able to host our entire team for a two week development workshop between August 26 – September 7.

Workshopping an existing script is not normal procedure for North American companies, but it is an essential component of Modern Times’ creative process. It allows time for the team to delve into the text and experiment with alternate interpretations. Particularly as a translated text (we are using a rarely produced translation by Langston Hughes), the team had much to discuss.

Our cast is incredibly diverse, with a number of cultures represented and languages collectively spoken. With this, we had the luxury to compare various versions of Lorca’s script, including the original Spanish. The ‘timeless, placeless’ nature of this piece remains key to Soheil’s vision, and with this each team member was welcome to bring to the table a unique perspective from their own language and culture.

During the workshop, we spent time on both text interpretation, as well as explorations of movement and music. We were fortunate to have our entire design team with us, so preliminary recordings, set elements and costume ideas are also already in development.

Our final rehearsal period begins in February, and we look forward to having the entire team back together again.