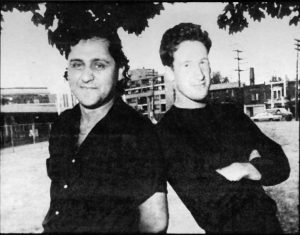 What was this show about, Soheil?

Soheil:  “The Four Cases” is Bahram Beyza’ie’s mythic play about the dangers of absolute power. Four figures– The Red, The Yellow, The Green and The Black — are dominated and manipulated by “The Scarecrow”, an allegorical figure who represents dictatorships. The four figures are separated by the Scarecrow and eventually end up building boxes for themselves to isolate themselves. It’s a pessimistic play, but very funny, and leaves the audience with the hope for human perseverance in the face of tyranny.

Soheil: It was the first production Peter and I translated together. I did the rough translation from Farsi and Peter reworked the English. We did five more translations of Iranian plays together after that. It was one of the most physical productions I have directed. It was the closest I came to dance theatre for me. Stylistically we were exploring something new at the time. There were strong non-naturalistic elements that were new for the actors. There was live music on stage performed by Baha Sadr. Music was another character in the piece. It was an intense show physically.

As an actor in the show, would you agree, Peter?

Peter: It was exhausting. We were basically non-stop from start to finish, running, jumping, falling, building boxes. It was crazy fun. I learned how to work in an ensemble where you have to be there for the other actors. 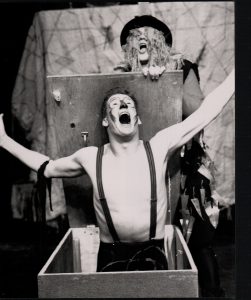 What do you remember about the process?

Peter: I would say that it was the first time we really started to develop shows in a longer rehearsal process. We took our time rehearsing and exploring The Four Cases. We worked in the evenings, anytime we were free from our regular jobs. Soheil was driving a school bus to make a living. I was working office jobs. As a company, Modern Times would eventually opt for this development approach, at times rehearsing fourteen weeks over a year and a half. I think our exploration of process helped to define the company.

Soheil: I remember we rehearsed on Queen Street West when the Theatre Centre was in the Shaw Building, and our rehearsal hall was above the old Legion Hall. I remember Sara Meurling, who was the producer of the Theatre Centre at the time, came up to the rehearsal hall one day and said, “You have to tone it down. You’re shaking the whole building. The chandeliers are shaking downstairs!”

Peter: The veterans were not so happy with us.

What was the Queen-Ossington area like in those days?

Peter: It was just as colourful, but in a different way. It was way before anything was happening there economically and the street was a very different scene.

Soheil: It was a bit empty, a bit sketchy at times. Completely different to now.

You played the show both at the Tarragon Extra Space and at the Montreal Fringe. What was the Fringe show like?

Peter: It was the very first Montreal Fringe actually. I guess you could say it was our first tour. All seven of us climbed into the back of a rented cargo van and basically sat on the boxes on the way to Montreal, eating sandwiches and drinking juice. There was a great spirit at that Fringe.   I think it’s when I fell in love with the city. I eventually moved there to make my life.

I remember we played in a building that would eventually become a Blockbuster. When I would go in years later I would still feel the stage under my feet in the SciFi section.

Soheil: We had received our first grant as a company, I think from the Toronto Arts Council, to pay for the rental of the Extra Space at the Tarragon, but we basically had no other money. We self produced it from our own pockets. I remember handing out the share of the box office receipts to the actors after the shows in Montreal, and after all the production expenses were paid, it was like $20.50 or something for each of us. Nick Greenland who was stage managing for us looked at us and said: “What is this?” I said, “This is your share.” He was so crestfallen. It was so terrible to work in those conditions.

Peter: Both Soheil and I lost our credit cards after that particular show. 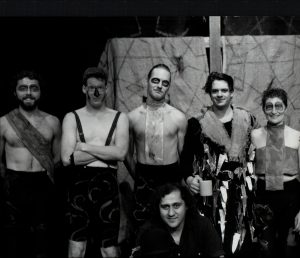 Looking back on the show now, what did you think of it?

Peter: I remember thinking that despotic regimes was a subject so far away from me, but when we played it, I remember how the basic need for freedom spoke to me. I began to see the Iranian works as something that could really connect with an audience, and that I was learning something about being human.

Soheil: I think it was a very good production for an emerging company. We were establishing ourselves. I remember Jon Kaplan coming up to me in the lobby of the Tarragon after it and saying “It’s a fine show, Soheil.” That meant a lot to me. There was another good review from Sara Hood who was writing for Theatrum at the time. I will never forget, however, a friend of mine who came to see it and asked if I ever really listened to music. I asked, “Why?” He replied, “In music you have constant variations of rhythm, but in your show you only have two.” It was true– the show was rhythmically at a very high pace most of the time. It was a very good comment, and after that I became aware of rhythmic variations, the musical aspect of plays.

Read the preview of the Four Cases from “NOW” Magazine.