Modern Times invited Danish-Iranian artist Vahid Evazzedeh to Toronto in January 2009 to give a workshop in Eugenio Barba’s Pre-expressivity. He was the first link in the chain that would lead in our four-year international collaboration with Denmark on our  ‘Forgiveness’ project. 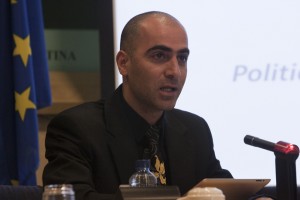 Theater is a meaningless activity if you think ‘rationally’. I was almost about to begin to think ‘rationally’ after having migrated from Iran to Denmark and after having failed to get any performance projects up and running during the first few years of my stay in Europe. Just before I left Iran a mutual friend gave me Soheil Parsa’s contact details. I did not know anything about Soheil, except that he was a successful Iranian theater director in Toronto. I sent Soheil an email before I left Tehran for Odin Teatret. By the time I received Soheil’s reply, I was in the most difficult situation in my life. Anything that could possibly go wrong had indeed gone wrong; and all my plans, down the drain. Soheil understood my troubles, himself having been stuck in similar if not worse circumstances when he left Iran with his family in the 80s.

Soheil and I kept talking over the phone and via email about theater for many years. I was disenchanted, bitter and pessimistic about any possible change of my circumstances. Soheil, in the contrary, was always encouraging, inviting me to be patient and told me about the many years of struggle that he had to go through in order to get himself established in the Canadian cultural landscape.

It took us nine years until Soheil and I finally met in person. He was one of the closest friends I had, not seen. On the morning of 21st January 2009 Soheil walked into the cafeteria at the Gladstone Hotel, sat down at our table and we continued our uninterrupted conversation about theater that we had sustained over the anticipation of that very meeting. Our colleagues were amazed at the familiarity of these two strangers. The conversation went on and it is still ongoing.

I don’t know why Soheil kept in touch with the belligerent young restless man that I then was, full of complaints about everything. I don’t know why I stayed in touch with him either. But we did and we still do. From time to time we call each other; I tell a few dirty jokes; Soheil makes fun of Iranian politics; and then we talk about theater at length.

And “theater” is unerringly what connects us together. There is something rather irrational about our friendship. There is something similarly irrational about theater too. I suppose the two negatives give a positive energy to this friendship, this companionship that has lasted so long despite distance and differences. Soheil and I do not even have an equivalent understanding of what exactly ‘theater’ is. Our practice is very dissimilar; so is our mode of productions: Soheil makes excellent performances that are successful and well received by audience and critics alike. I on the other hand make long-lasting, esoteric research projects with communal engagement. We both call what we do “theater” nevertheless. And theater is what gives meaning to our lives in the most profound sense. If we are compelled to think ‘rationally’, we have to admit that theater is a meaningless activity for various reasons. But theater is meaningful precisely in this that it provides a space for alternative modes of being that breaks the confinements of the prison of instrumental rationality that governs most aspects of our everyday reality.

When I was in the most difficult time in my personal and professional life, staring into the abyss of ‘reality’, almost convince ‘rationally’ that it is meaningless to do theater, it was Soheil that gave me encouragement and support to remain ‘irrational’ and pursue my dreams in the wonderland of theater. It is this disposition that connects us to each other and to the “theater” whatever the meaning of the word.

Vahid is an award-winning filmmaker and theatre director. He was born in Iran and lived there until 2001 when he moved to Denmark. Vahid specializes in training performers with the method he has created since 2006. He is a member of the board of experts at Roberto Cimetta Fund and the chairman of The Counter Institute.