The first of many wonderful experiences working with Soheil and Modern Times was in “Stories From the Rains of Love and Death”,

where I played the Teacher and The Man (who happened to be dead). The material was so compelling – dark, enigmatic and evocative – and I loved Soheil’s generous, challenging and very personal process. So much so that I’ve always come back for more!

The interesting “challenge” in playing The Man was that he was buck naked in his two appearances. While I’d in fact appeared nude on stage twice before (sounds like I’m a bit of a theatre exhibitionist, doesn’t it?), the last had been several years prior, and I really thought that my displaying that particular skill was well behind me. But Soheil convince me in his kind way that it was integral to the play, and I acquiesced. Between a strategically placed radio on a table that I aimed for every night, and my second appearance being rearview only, I was ultimately fine with letting it all hang out.

Not that there wasn’t a major bump along the way to opening night. For my final scene au naturel, I had to crawl under the raised stage to get into position for rising from the dead through an illuminated hole in the floor. Very spooky. The clearance under there was tops 3 feet, it was a maze of wooden struts and supports, and I had to navigate the twists and tight corners on my hands and knees, but I had made it through a few rehearsals without too much trouble. That was fully clothed. 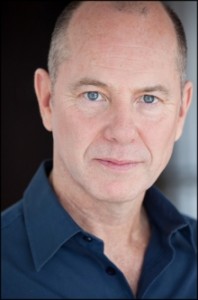 So we get to a tech run with the amazing lighting designer Andrea Lundy, and they want to see the light on my bare skin, so off I doff and down I go. The scene above me, between Peter Farbridge and Andrew Scorer, was quiet and full of tense dread. I’d almost made it to my hole when suddenly my bare backside made painful contact with a splintery 2X4 and an enraged “FUUUCK!!!” rang out from under the stage. There is a shocked silence in the house, then everyone up there burst into gales of laughter, and as I poked my head up, I had to join in. The textual addition didn’t remain in the show, but the tale was gleefully retold, at my expense, many times over many beers. It’s only slightly disconcerting that it remains Soheil’s favourite story about me!