We are thrilled to announce that this fall, Modern Times Stage Company and Crow’s Theatre will present⁠ 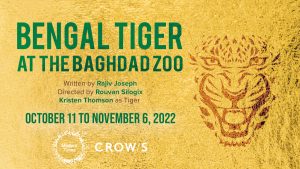