Modern Times’ mandate is to give a voice to artists; to this end, we would like to share a series of essay pieces written by former artists of Modern Times, specifically, but not limited to, those from Black, Indigenous or racialized communities, to give them a voice and highlight their creative work. We’re excited to share the second essay in this series – by Ahmed Moneka, a theatre artist who emigrated to Canada from Iraq, and who has participated in workshops for Modern Times’ Postmarginal and “Thirst”.

I remember the first time I was in a rehearsal hall in Toronto was in 2017 at the Modern Times Stage Company, when I attended a multilingual workshop of “Waiting for Godot”. There I saw how diverse it was, with people from all over the world including directors, dramaturges, facilitators, and participants. For me, as a black Iraqi who was acting for the first time in English, I was so surprised and happy to be part of this amazing collaboration. It gave me hope back as an actor who had been exiled two years prior from his home country and who had not been able to be in a rehearsal room since. I was like a kid in wonderland– the joy of exploration was back. The respect was so high for every individual in the room; there was so much space for everyone to share and exchange observations and comments. Also, as an immigrant with no experience in Canadian theatre, and after only three days of workshops, I got life changing connections leading to four new contracts. I got into a devised theatre process “Thirst” with Modern Times Stage Company, “In Sundry Languages” with Toronto Laboratory Theatre, and “NO Woman’s Land” by Jaberi Dance Theatre, research work with Brock, Ryerson, and York Universities. As well, I received the grant from the Newcomer Mentorship program at the TAC. 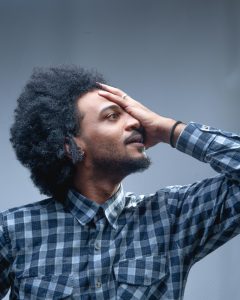 I’ll never forget the first play I attended at Modern Times. It was “Blood Wedding” by Lorca. That was the key for me to start the conversation with Soheil Parsa and tell him how much I liked the play and my favourite moments. Because this company was opening up to different talents and backgrounds exploring with a lot of schools of theatre.

An inclusive theatre company is a hope maker for a lot of people of colour and everyone in Toronto. It would be focusing on human stories from all over the world including people for whom English is a second language without the stereotypes they may carry and race or history clichés. That’s not a common thing to find in the Canadian theatre scene even though everything around us is quite diverse. Moreover, we need to zoom into our society and face the real problems and be close to everyone’s potential issues and work them out as a way to help and heal our communities. Our local artists and writers could be impacting many of us in a positive way. Also, we need to highlight a different perspective of theatre style in this  experimental way, while keeping the authentic classic way including dance, movement, music etc. It’s nice to work with different schools and methods to deliver stories to the public. 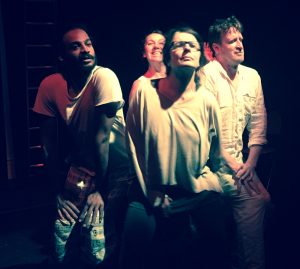 Theatre for me is the flipped mirror of reality. It’s the place that answers our questions and sometimes does the opposite by lighting up our mind with new questions and conclusions. It’s a very healthy practice being involved in live theatre. I started to do it when I was 15 years old, which means half of my age. It’s the place of catharsis. Especially now we are so fragile in terms of emotion on one hand and the lack of connection and vibration on the other hand. Mentally, this creates a lot of fear and trauma. It makes me more eager to do live theatre and exchange my thoughts and go through experience to make those emotions less powerful in my mind.

Bio of Ahmed Moneka: Since arriving in Toronto, Canada from Baghdad, Iraq 4 years ago, my contributions as a performing artist in music and theatre have been welcomed and notable. The scene has warmly embraced my Iraqi artistic heritage – its stories and songs – into its own growing cultural narrative. I’ve found myself enriched through many collaborations including: Canadian Opera Company, Aga Khan Museum, Tafelmusik, Driftwood Theatre Group, TD Toronto Jazz Festival, Koerner Hall, Modern Times Stage Company, Lulaworld and Jaberi Dance Theatre and Tabula Rasa Theatre. Also, I’m one of the founders of Moskitto Bar and the creator and leader of Moneka Arabic Jazz.  I’ve been an Artist-in-residence with Driftwood Theatre Group: Stingray Rising Stars winner 2019 at TD Toronto Jazz Festival.